Unite General Secretary candidate Ian Allinson had asked Len McCluskey for a copy of the report into women officers in Unite and asked for it to be made available to members before nominations opened. The union refused to release it. Ian Allinson has now been sent the report anonymously, and has published it alongside this statement. 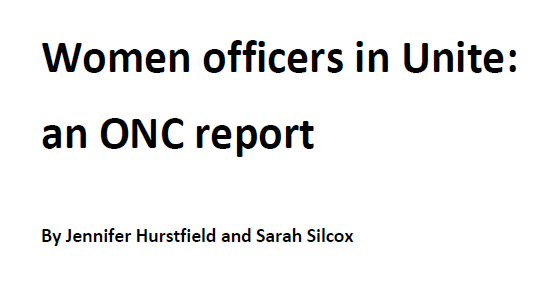 Now having had the opportunity to read the report, it is clear both why it must be made available to members, and why the leadership of Unite has sought to supress it.

Many union activists have to argue with employers that hiding problems prevents dealing with them, and to be more open and transparent about equality issues. This was the logic behind our lobbying for mandatory equal pay reviews, and even behind the Tories’ watered down gender pay gap reporting. How can activists expect to be taken seriously challenging employers when our own union is adopting a less than role-model approach?

The research was commissioned by the Officers’ National Committee in 2016 and undertaken by two experienced and reputable independent researchers, Jennifer Hurstfield and Sarah Silcox. They have previously published in both academic and professional journals, and led research projects for organisations including ACAS, CIPD, the Department of Work and Pensions, the Institute of Employment Research, ACAS, and the Health and Safety Executive.

The heart of the research was a detailed survey sent out to 76 female Unite officers, which achieved a 100% response rate.

The report shows significant problems with sexism, bullying and harassment within the union and that many women officers do not trust the leadership to deal with these problems fairly. Many perceive that management will deal with problems according to the relative power of those involved within the Unite structure. As well as issues specifically affecting women officers, the report indicates problems with management and working practices in our union (e.g. work allocation) that are also likely to affect male officers. The wider implications involve not just women and those with other protected characteristics / equality strands but all employees and members of Unite.

While Unite’s leadership claims that it is implementing the specific recommendations of the report, there is no way these issues can be effectively tackled behind closed doors.

How can we win an argument with members and activists about challenging aggressive and sexist behaviour from members without talking about the problem, its scale and its impact?

How can we reduce over-reliance on managerial authority and patronage without increasing democratic accountability?

There should be no climate of fear in our union. Officers should have confidence that issues they raise will be dealt with fairly and effectively. No organisation in this sexist society can be immune from it, least of all one that deals with such a variety of employers, members and others. But we can aspire to be a role model in how we tackle such issues. Not only is this the right thing to do, but failing to do so makes the job of all our activists, challenging employers over similar issues, much, much, harder. Tackling these problems is essential if we have to have the best possible officers, rather than being unable to recruit, retain and get the best from some because of how they are treated.

If elected I will:

Ian Allinson, the grassroots socialist candidate for Unite General Secretary, argues that equality issues have to be better integrated into our industrial agenda. That requires putting our own house in order, which can’t be done secretly.